An Intro to the PESO Model From Its Creator, Gini Dietrich

The PESO model reflects the reality that marketing, PR and communications have changed dramatically over the past twenty years.

No marketing effort can be executed in a vacuum, unless like a vacuum, you want it to suck.

Everything is integrated now. Marketing, advertising, communications and public relations activities are inextricably intertwined. Whether you’re writing a go to market plan or creating a customer persona, what you do in one sphere, overlaps and impacts another.

Thankfully, insightful professionals, like Gini Dietrich, have thought this through and given us a model to guide our efforts. The Peso model, which Dietrich created, literally consists of overlapping spheres and is incredibly helpful for making sure your marketing efforts don’t suck.

Awhile back, Gini took some time out of her busy schedule to chat with us about the future of PR, the PESO Model she created and how social media has changed PR.

We think her model and thoughts on PR are so relevant, that we’re resharing our interview with her.

As an aside, if you ever find yourself struggling to explain to friends and colleagues what exactly you do, you’ll appreciate Gini’s pie graph about halfway down this post.

What about the way that PR has traditionally been done no longer applies? What’s timeless?

“The cool thing about PR is that nothing has really changed. The tools have changed. The way we communicate has changed. But the basic tenets of the communicator’s job remain the same.

We still communicate with our internal and external audiences — and that’s what makes what we do timeless.

The role of the modern communicator today is to adapt and evolve, but strategically keep the basics in mind. By nature, we are relationship builders, content crafters, and communicators. In those characteristics you can find media and blogger relations, influencer marketing, search engine optimization, content marketing, social media, and more. The idea that we only do media relations and events makes me crazy. Those are two tactics in our larger strategic oversight.

To boot, today we have access to the data and analytics that allow us to have PR metrics — and finally prove we are an investment, not an expense.”

How did you come up with the idea for the PESO model?

“We’ve used the PESO model internally since 2009, but we didn’t have a name for it and the process wasn’t as clear as it is today. (That’s the case with nearly everything, isn’t it?) Then I read Traction by Gino Wickman. In it, he describes how important it is to have a process clearly defined — and to give it a name. We started to figure out what that looked like internally. It became more clear after I read Built to Sell. We finally had a process and name. Then it was up to our designer to give it a face.

When I wrote Spin Sucks (the book), it was really important to include that process in there as I set out to write the handbook communicators need to create an integrated program. The rest, as they say, is history.”

“The best part about the PESO model is that it’s fluid. So if owned media doesn’t work for you, you don’t have to use it for the model to be successful. The idea behind it is you have four media types that, when used together, create authority, build awareness, and generate qualified leads. You may lean more heavily on one or two of the media types, but don’t want to forget about the others.

It’s also important to note that the PESO model doesn’t necessarily start with paid media. We labeled it that way, simply because it’s easier to remember that acronym versus OESP or EOSP or any other combination. Start with what makes most sense to your business — and add the others in as they are applicable.”

What would you say to people who still think PR can be done in a vacuum without regard to all four types of media?

We created the following graphic to show everything we do… and we’re probably missing a few things, too. It’s not just media relations. And, until we step up and own the PESO model conversation, our marketing and search brethren are not going to get the respect we deserve.” 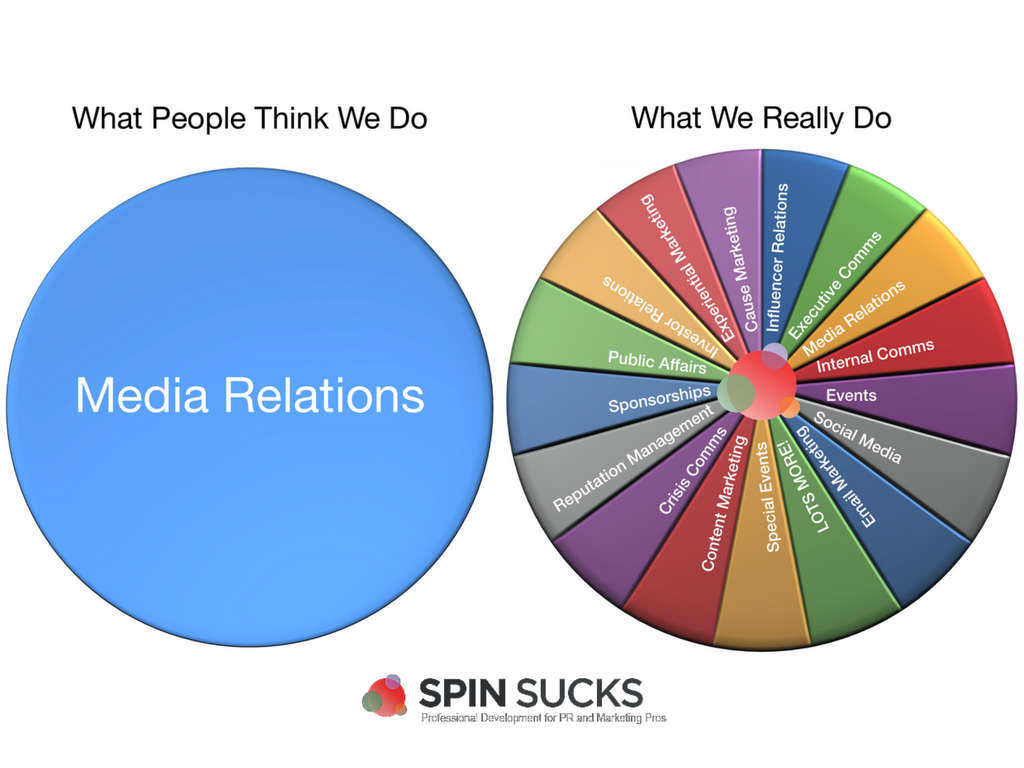 How has social media changed PR?

“When social media came into my business life, I sang a glorious song and danced a jig. I’m only half-joking. Social media has changed everything — and yet everything has stayed the same. It has been critical to the success of many communicators because it’s made it far easier to communicate one-on-one and customize messages, based on an individual’s likes and dislikes.

At the same time, it has make crisis experts out of all of us. What once was a discipline served by a select few who had expertise, we now all have to be on the lookout and ready for when (not if) social media brings a crisis to our attention. It could be as uncontrollable as what happened with Crock-Pot — or it could be part of the #MeToo movement.

While many things remain the same, we have had to learn how to communicate with new tools. That’s what makes our jobs so interesting and fun these days!”

How To Build an Integrated Marketing Plan

Everywhere you look, you find messages that resonate with you and complement what you’ve already heard about a brand. Every message is different, but consistent. Every engagement moves you further through the marketing funnel until you purchase. This kind of marketing doesn’t just happen. Integrated marketing follows a proven formula.

We’re already well into the new year and are starting to see some of the trends marketers were discussing back in 2021 playing out. We asked our team of millennial and Gen Z marketers at OBI to share their top marketing and content trends worth tracking in 2022. Here’s what they’ll be paying attention to this year.

We surveyed some of our internal experts and compiled their insight on the most important trends brands should pay attention to in 2022 — and how we can leverage them together for greater success this year.